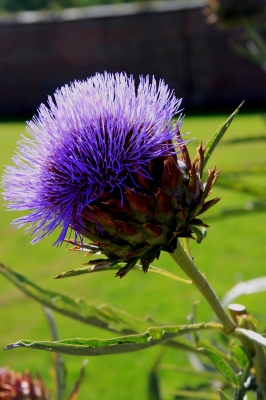 Is artichoke nutritious or just weird?

Growing up I was probably one of only a few children who was not pushed to eat vegetables.  My parents were meat-and-potato eaters, and our vegetable was usually a green salad (think Iceberg lettuce, radish slices, and some green onions) or carrots sautéed in butter and brown sugar.  What was not to like about that? So as an adult, vegetables are an adventure, and I have a slightly skewed perspective on them.  Mostly, I wonder what prompted early Mankind to decide to try to eat certain foods.

I understand squash, and carrots and peas and other routine vegetables.  But there are some, such as mushrooms, artichokes, ginger and the like, that puzzle me.  I wonder how many people had to die before they figured out which mushrooms were poisonous…and why in the world would you decide to eat something like that, covered in dirt and dung, and look at it as a delicacy?

Today let’s look at the artichoke.  If you really look at it, it’s a weed.  It’s a thistle, which has a very pretty purple flower, but what in the world made anyone decide that an artichoke would be delicious?  The tough outer leaves with their nasty thorn hide a delicious and nutritious heart, but why in the world did someone take the time to: #1 decide it might taste good and #2 figure out how to cook it?

Let’s take a walk down history to find out the hows and whys of this odd-ball vegetable. In 77 A.D., Caius Plinius Secundus (AKA Pliny the Elder 23-79 A.D.), a Roman naturalist, called the artichoke “One of the Earth’s monstrosities.” (Back then the artichoke didn’t have a good pre

ss agent.)  Ancient Greeks believed that eating artichokes led to the guaranteed birth of baby boys. (Back then they also thought it was up to the woman to decide the child’s sex.) Around 800 A.D. the Moors started seriously cultivating this vegetable and developing it into the plant we know today.   In the 1500s Catherine de Medici is credited with making artichokes famous in Italy, but Johann Wolfgang Goethe (1749-1832) shunned the artichoke and said “The peasants eat thistles.”

Today they are one of the most popular vegetables, with 100% of the USA’s supply grown in CA, mostly in Castroville (The self-proclaimed Artichoke Capital of the World).
They provide many health benefits, including but not limited to:

This still doesn’t help me figuring out how someone decided to try it.  The first time I ate it I had to watch everyone else start as I had no clue how to even start! It seemed very labor-intensive to me for such a little bit of food.  However, I quickly learned what all the fuss is about.  It’s definitely not first-date food (way too messy), but it’s delicious and prepared properly, low fat and high fiber.  You’ve just got to watch out for the mayonnaise or butter dipping sauce!

For cooking videos and recipes:  www.Healthy-Cooking-Videos.com

© 2010-2022 Happy Food | All rights reserved. All materials on these pages are copyrighted. No part of these pages, either text or image may be used for any purpose.
Site designed my NonStop Marketing